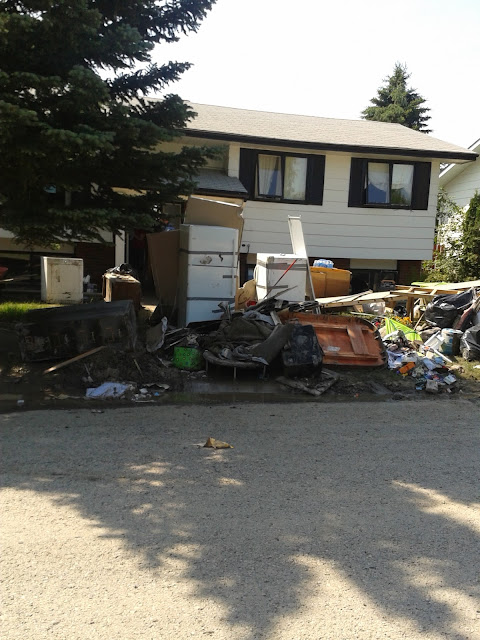 {Some of the carnage piled in front of our house. This was even AFTER one 3-tonne truck load to the dump - there were more to come.}

Happy Canada Day to us!
We got to come back to our home a week and a half after being rescued from it.

After posting two very long accounts of what we went through, I hope this one will be shorter. It is difficult to put into words, to try to explain all we felt. This post has a lot of photos rather than a lot of words. It's all about damage. And a massive cleaning effort by so many. This is also a story of blessings and gratitude.

I wish I had more pictures of the damage we saw as we drove through our town to our house. Train tracks which looked as if a giant had picked them up, twisted them like a Twizzler, then dropped them back down on the ground. Houses twisted on their foundation. Boats, "beached" (mostly one area in particular). Feet and feet of mud. The mud was everywhere.

We came to a stop in front of our house and saw more mud, with a bit of grass poking through. So muddy. Some of it was dry, some of it was still slightly damp. 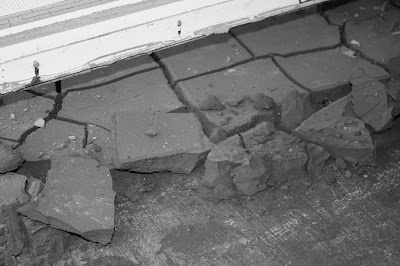 {This is how much mud was caked on our lawn and our sidewalks. Several inches worth} 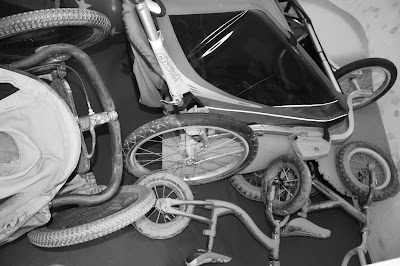 We checked out our yard, shed, and garage first before entering the house. Even the shed, which was closed, had a layer of mud. (see above) 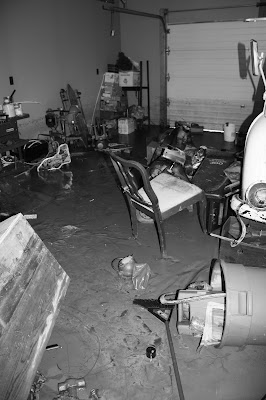 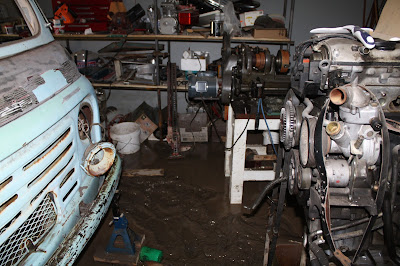 Poor Andy's shop/garage had SO much mud. I mean, look at the floor! Several inches (and by the way, we were lucky with this much mud. Many homes had FEET). 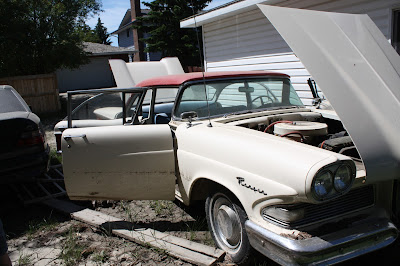 {Poor Andy's Edsel}
(side note - the insurance companies were writing off all vintage cars and towing them away, but Andy simply refused! He has done all the work himself and will do all the work to get it back into working condition. It was his grandfather's after all!) 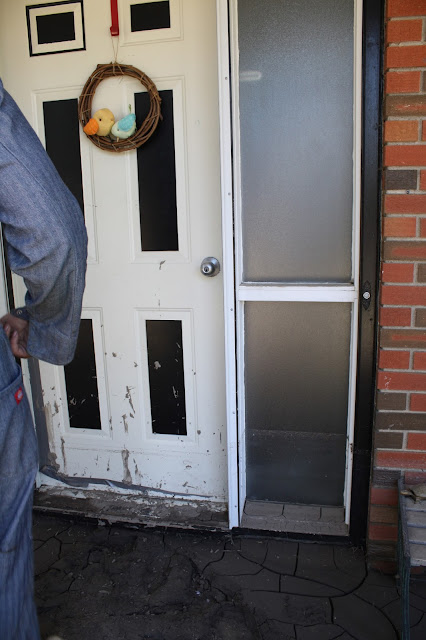 After looking over the yard, we came to the front door. Also very muddy.

Remember the color codes for the homes? Green (being the best), Yellow, Orange, then Red (being the worst). I was not foolishly hoping our house was green. I knew the state we had left it in. I was  hoping for yellow. At least we'd still be able to live there. Minor cleanup. Well, we weren't so lucky. Our house was orange. Extensive repairs would have to be made for it to be habitable.

And this was our first look: 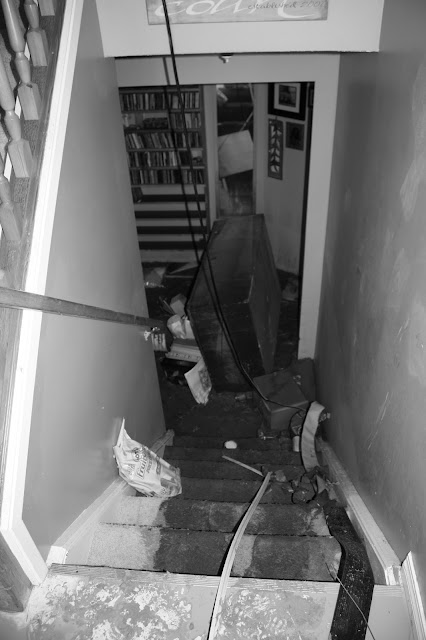 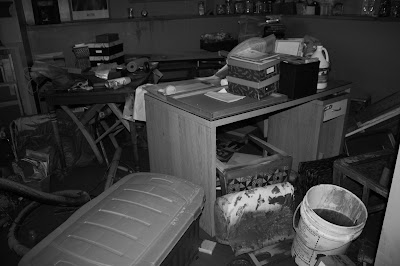 All our furniture was moved around. And covered in mud. 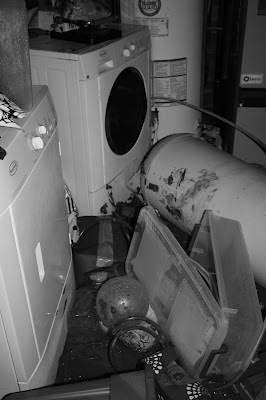 And many things that hadn't been touched with water were rusty from the humidity! 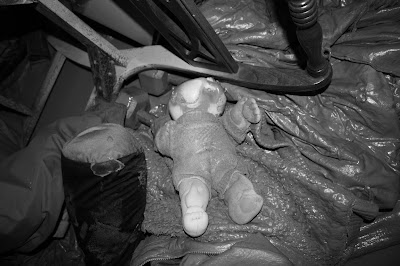 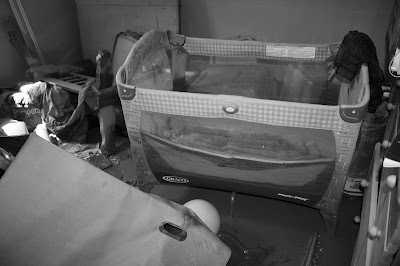 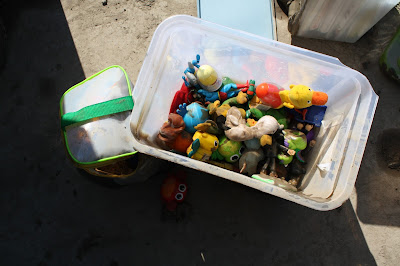 I was so sad to find this toy bin in the carnage. When I had been running around trying to save things, I thought I had gotten all of the boy's toy bins. We have a few that have small toys in them. This one was full of  animals and people and included the set of Fisher Price A-Z Zoo animals a dear friend had second-handed to us. Atlas loved this set! So sad. 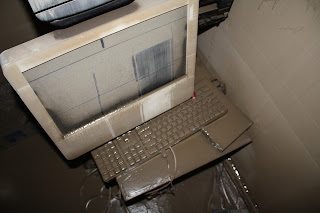 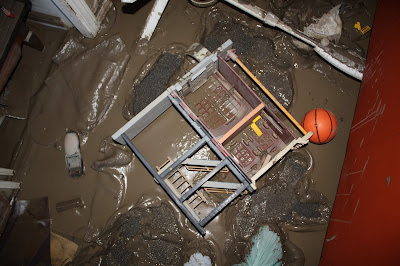 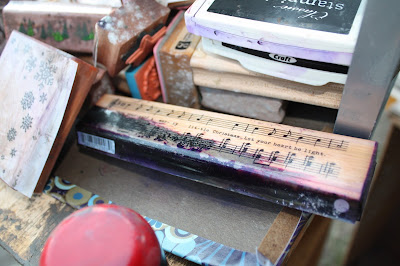 Some items already had mold growing. 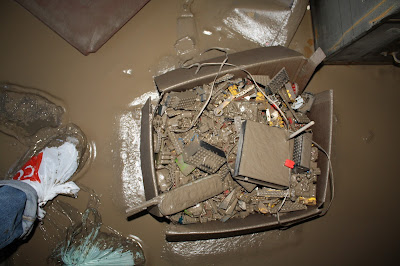 A very large amount of Andy's LEGO was found covered in mud. And by mud, I mean silt from the river mixed in with some good ol' town sewer. All of it was pretty disgusting. Not to mention highly unsanitary. 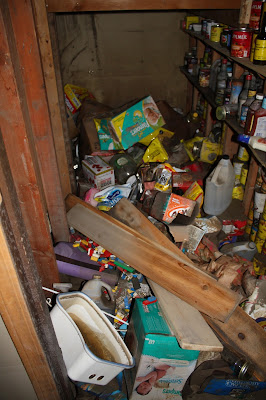 {our food storage}
In our religion, we have been counseled by our top ministers to have a year's supply of food and necessary items. We had as much as our small storage space would accommodate. All gone.

But then there were the miracles. 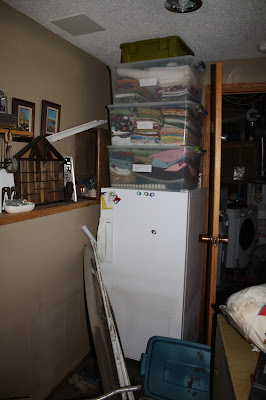 Most people who had a freezer in the basement found it overturned and opened up, with rotting food everywhere. Ours was weighed down by my fabric bins! This not only saved our freezer from contaminating everything further, but also saved my fabric! Unbelievable.

I remember as we were running around during the flood, trying to save things, Andy asking me, "Is there anything else under the stairs we should save?" And I thought no, just food. But later I remembered that there were two little bins full of the boys' Christmas treasures. The boys are still little, and it wouldn't have been the end of the world if they were damaged and lost. But some of the items in their bins were hand-made ornaments from their Gramma, and special gifts from friends and family. I thought for sure they would be gone because they had been submerged. But when the cleaning/wrecking crew brought them out and Andy opened them, I couldn't believe my eyes. The tops of the bins were covered in a layer of mud - evidence of them being submerged - but the items in the bin were miraculously untouched. Unbelievable. 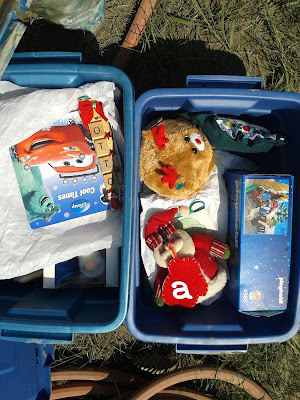 Another miracle was the help we had in the week we did the big cleanup. Our volunteers were friends old and new, and strangers too. Friends who couldn't physically come out and help took items to try to clean and salvage. In our haste, we had forgotten one photo album from Andy's childhood and two or three small albums from mine. Sadness. But a good friend took Andy's album of photos, cleaned them as best she could, then took them to be digitally restored. Amazing. A friend who worked all day gutting our basement, took home bags and bags of nasty LEGO. She cleaned them and returned them! Unbelievable. Many friends took things to clean. Many friends came to help clean. Absolute God-send.

In all of this, I have cried more (and continue to shed tears) for the generosity of friends, family, and perfect strangers, than I did for the loss of our material possessions. Such love and caring these people showed us. So willing to help. We could not have done it without them. 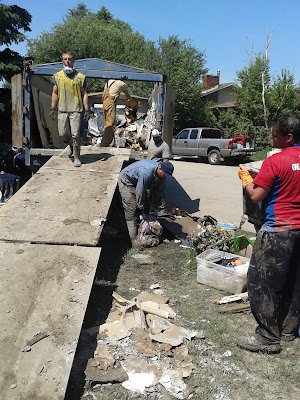 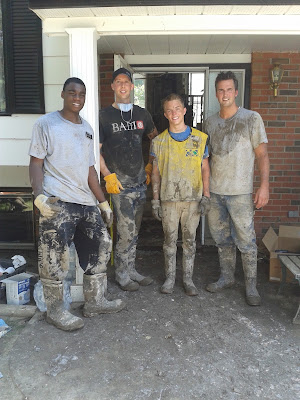 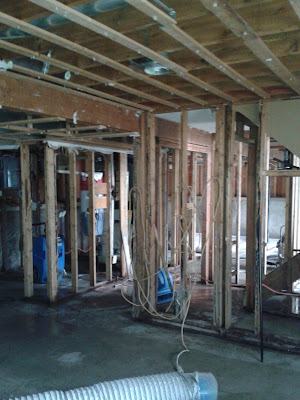 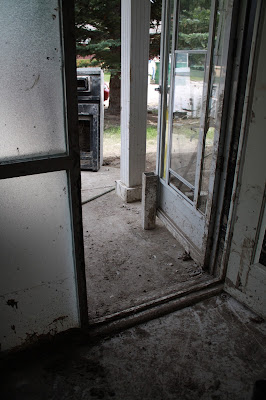 And that's how it went. Many hours of cleanup. And many more still to come. 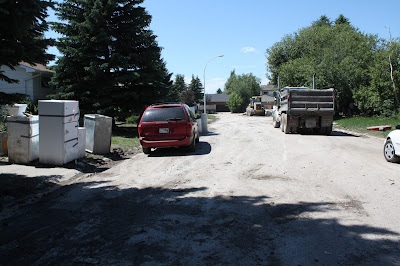 This is what our street looked like nine days after we were let back in to start the clean up (and this looks pretty good compared to the first two or three days). One friend described it something like this: "You see pictures in the news of the devastation, and you think, That's so sad. Then you see it in person and you realize that the devastation doesn't stop at one house. It is house after house, block after block of mountains of garbage piled high on peoples' lawns and on the street. Dirt everywhere, the air thick with it. There are no words to describe the feeling of absolute chaos, and the magnitude of the aftermath. And I'm just a spectator, I didn't live through it like you guys did!"
Yes. This is our life right now. Dealing with the aftermath.

I'm the kind of person who, when something happens I try to deal with it. It-was-going-to-happen-anyway-so-let's-just-make-a-plan-and-get-through-it type of person. This has been hard, yes. But the human spirit is amazing. Especially when that spirit has so many others rooting for them. Thank you all for your prayers, for your service, for your love. You continue to amaze me with your generosity and caring.

Nevertheless, my heart was breaking for all my friends and neighbors. People in worse shape than what we saw at our own house. Friends who still couldn't get into their homes because two weeks after the flood, they were still under water. Friends who came home to see that their house was coded red. We came to learn that there were many shades of red. Red could mean anything from extreme damage, will take extensive repairs, to uninhabitable and condemned. Heart breaking.

We sat late one night and cried many tears with a dear dear friend. Her house was red. In any normal circumstance, we would be the first to be there to help her, but since we were victims too, we couldn't do all we wanted to help our friends and neighbors. That was hard. I still cry about that. 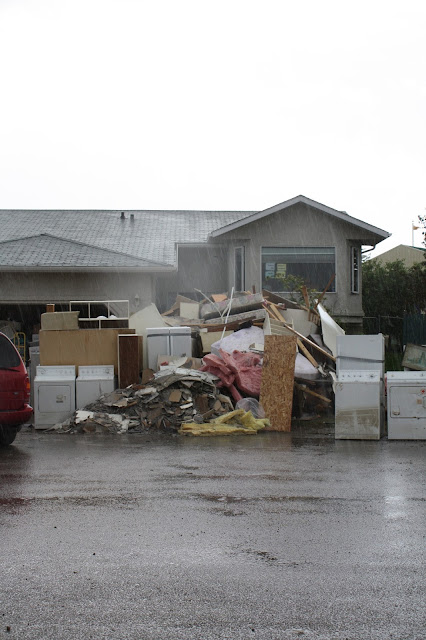 This is my parents' house. It's on the side of town that isn't even near the flood plane. The devastation in every neighborhood was unbelievable. The difference from house to house was unbelievable too! On my block, neighbors across the street were yellow. We were orange. And our neighbors next to us were red. On my parents' street, they had about a foot and a half of water. Their neighbor to the right had about three feet. Their neighbor to the left had about seven feet. It was unreal.

Cleanup efforts continue. We will be in various stages of cleanup for a long time. But we are getting through it. It will take time. It will take effort. It will take love. This isn't the end. This is the beginning of a new kind of life for us {whether we want it or not, but we're going to ride it through}.