Deiter F. Uchtdorf spoke at the last General Women's Conference of the Church of Jesus Christ of Latter Day Saints. His talk seemed to speak directly to me. He speaks directly to all women everywhere. My friend Becky posted this on her blog, which was a great reminder to me of the highlights of all that he said, displayed in such a beautiful manner.

No, not really. But I'm posting this blog from my hospital room today. Yup. Hospital. So not fun. I came in yesterday with symptoms for kidney stones or just a really horrible, terrible, no good, rotten urinary tract infection. I was pretty much in pain from 9am till 11pm or so, getting progressively worse as the hours ticked by. By 11 pm when they finally started giving me iv antibiotics, saline, and morphine, I was in mucho intense pain. But as soon as the antibiotics started to kick in, I began feeling a bit better. Then the morphine kicked in and I started to get drowsy and the pain started to fade. Morphine is great for pain, but it feels icky, that's for sure.

Anyway, to look on the bright side, our midwife, Sivan was with us the whole time last night and she remarked that I will be a pro when it comes time to labor because the pain I was having was so much more intense than labor pains will be! Some consolation at least?

Our midwife was great, the obstetricians were great (baby is great), and the nurses were wonderful.

I'm feeling drastically less pain today. Very tired, but feeling okay otherwise. They keep putting in the iv antibiotics and they want me to get an ultrasound to check my kidneys and urinary tract, and just to check on baby, but since it was the weekend, and there is only one radiologist for the entire hospital, we are all on a very long list to get ultrasounds today.

Since I feel so much better today, I am assuming that either the antibiotics are killing whatever infection I have or I actually passed my kidney stones last night. At least I am feeling better.

I hope you all had a much better Valentine's and Family Day weekend than I did!

p.s. I would post a picture, but you don't want to see this face after such a night! I popped some blood vessels or capilliaries around my eyes. Not a pretty sight. I just need some rest and I'll be as good as new (I hope!).

p.p.s. It just so happened that a good friend (expecting twins) was in the same night I was, so we had a little visit this morning. Nice coincidence. Not being in the hospital, but getting to see a familiar face. As far as I know, she's going home today for more bed rest.

UPDATE: I was able to be discharged from the hospital Monday night around 7pm following an ultrasound and doctor's consult (who happened to be Diana [Poulin] Timms' brother). The prognosis? Hydronephrosis. Distention (dilation) of the kidney with urine, caused by backward pressure on the kidney when the flow of urine is obstructed. They assume that the urine was obstructed by either stones or that baby had been putting pressure at a certain point to cause a kink in the line. Well, whatever it was it was painful and I'm glad that it is over.
We got home last night and I went straight for the shower then straight to bed. Roughly 12 hours of sleep later and I'm feeling rested and much better.

It's Valentine's Day and we've spent the day sleeping and watching movies. My poor Valentine was up sick all night and morning. I started feeling better by noon, but we're still pretty lathargic. Poor Andy.

I found this quote on love just yesterday and I think it's beautiful. Especially because of the reference to trees and roots. Happy Valentine's Day! 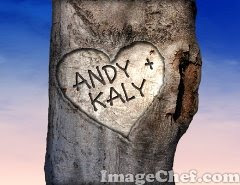 "Love is a temporary madness. It erupts like an earthquake and then subsides. And when it subsides you have to make a decision. You have to work out whether your roots have become so entwined together that it is inconceivable that you should ever part. Because this is what love is. Love is not breathlessness, it is not excitement, it is not the promulgation of promises of eternal passion. That is just being "in love" which any of us can convince ourselves we are.

Love itself is what is left over when being in love has burned away, and this is both an art and a fortunate accident. Your mother and I had it, we had roots that grew towards each other underground, and when all the pretty blossom had fallen from our branches we found that we were one tree and not two."
- Captain Corelli's Mandolin.
Posted by kaly No comments: 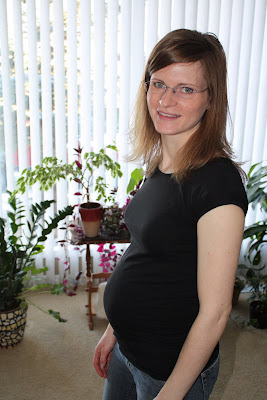 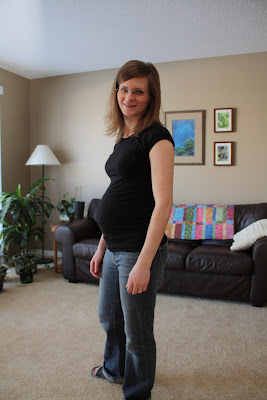 I'm posting this picture a bit late. This is me at 24 weeks. I'm now almost 25 weeks. Wow, does time fly! Especially when you're going by weeks. 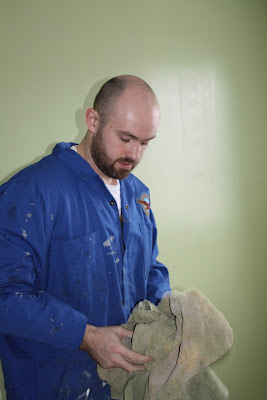 Here's Andy, plugging away at the baby room. Two coats of primer and this is the first coat of paint. I love it! It is a happy green, that's for sure, and it looks so cheerful in the daylight! You're doing an awesome job, Andy! 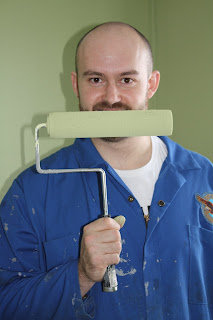 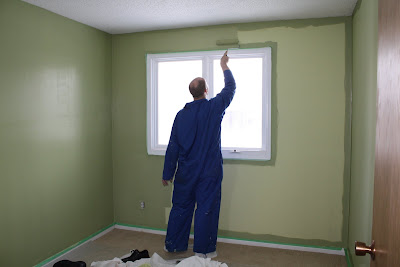