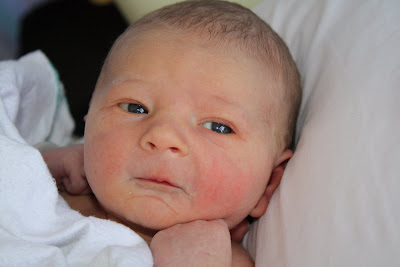 Otto was born Sunday, May 24th at 2:18pm, weighing in at 7lbs 10oz. He was welcomed into the world by his parents, Andy and Kaly, one of his wonderful midwives, Jane, and a slew of nurses, doctors and anesthesiologist. Yep, we ended up having an emergency C-Section at the Rockeyview in Calgary. Long story. But in the end, we're just really glad that both Otto and Mama are healthy and well. 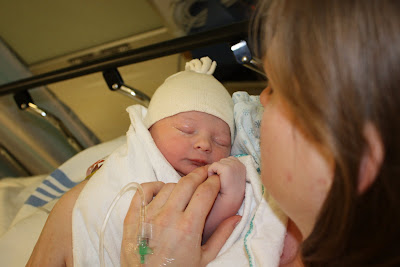 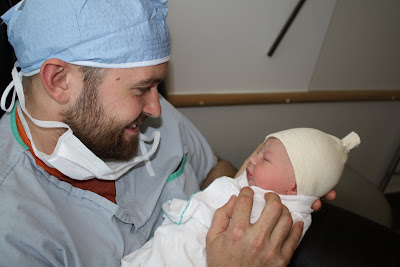 Otto is a happy little guy, very content. His cry sounds like a wee pterodactyl, and he does these cute little bird squawks. He makes so many faces already, and when he's awake, looks straight at us with alert eyes! He's perfect.


We arrived home today and we're resting and adjusting to life outside of the hospital! Thank you for your prayers and thank you to all those who have helped so much already! 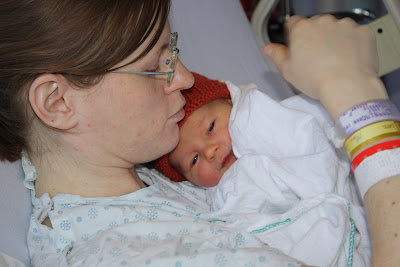 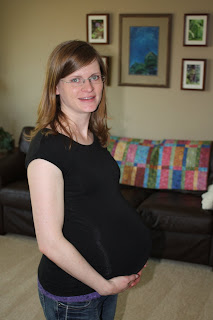 I know that only about 5% of births happen exactly on the due date. Is it wrong to hope like heck that we're one of the 5%? 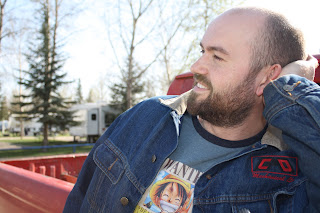 I want this baby out! I'm 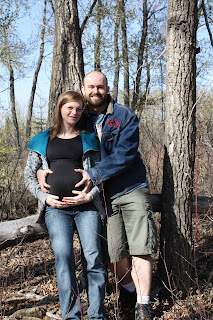 terrified that the longer this baby stays in, the bigger this baby will be and I might not be able to get baby out!

Today I put together a little ABC book with my Zutter machine. It's so cute, and the animals in it are adorable. Colors are great too. I'll post a pic another time. I also made cookies. Tonight we went to Okotoks for a 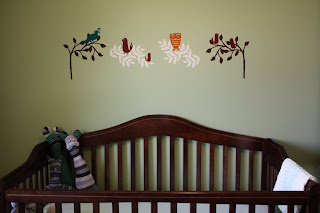 walk by the river and out for supper. Andy swears he was trying to make me giggle, but I think he's trying to bear-claw the baby right out of my belly in this pic!

This past week the baby room has really come together. I mod-podged some paper onto a bookshelf and cut some vinyl shapes for the wall with my CriCut. Andy finished the drapery rod so we hung the drapes. There are only a few things left to do for the completion of the room, but Andy insists he will need something to do when the baby actually does arrive. So, here is one picture to whet your appetite, and I will show more when things are finally together.
Posted by kaly 3 comments:

Last week we prayed that the baby wouldn't come until after the recital. Baby listened and hung out for awhile longer.

Saturday came and still no baby (even after some intense contractions Friday night). So then I got to thinking, Hey, I could stand a little more time to get some things done. Time is good. Time is nice. So this is what I've been up to: 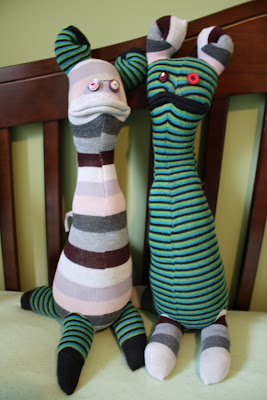 Sock Creatures. I've made three. Just finished the last one today. We've got the twins, Max & Millie, and little Percy. They're kind of fun and a bit ridiculous. Check out their awesome tails! 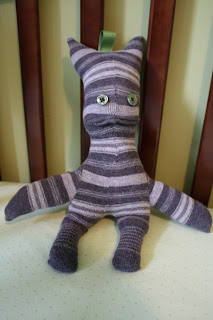 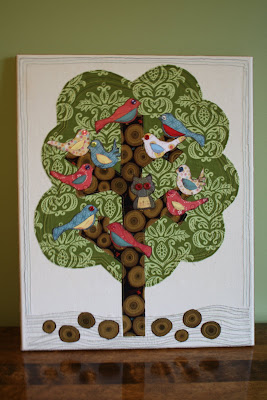 On Monday, I made this piece of artwork for the wall. I sewed fabric and also added paper and buttons. The tree and the birds are all templates I made from Maya Road chipboard shapes. I'm sure I could have come up with something more original, but I really loved these shapes, so I just drew them on my own and adapted them for this project. 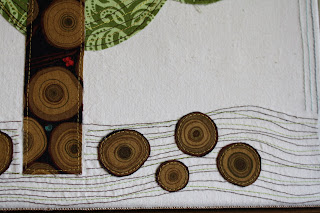 I love the sewing on the bottom with the little round logs. 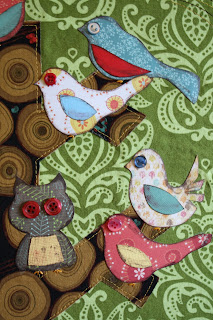 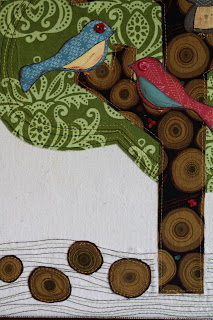 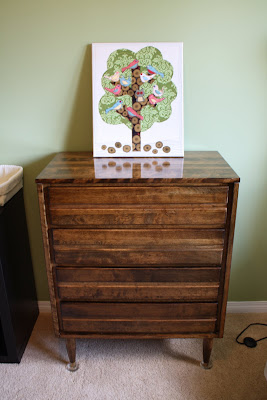 Andy finished the set of drawers. It is BEAUTIFUL! I love the look of the grain. 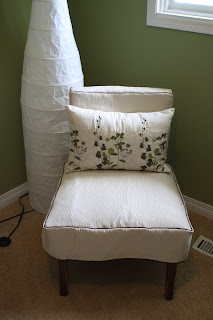 Over the Easter holiday, I made this slip cover for the chair. 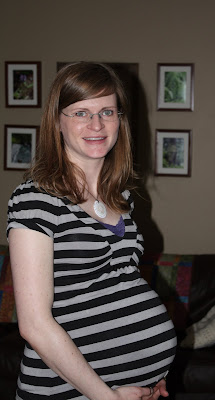 I've been getting the baby's room more together and it's looking great! I've been cleaning and tidying spaces around the house and tomorrow I will do some baking. I'm really enjoying this TIME!

But... I am getting bigger. Can you believe I've gained almost exactly what the midwives hoped I'd gain: 40 POUNDS! I'm out to HERE!!! Mostly I'm feeling pretty good. I've got Braxton Hicks contractions, constant kidney pain, and now swelled legs, ankles, and feet because I have to spend a good portion of the day (and sometimes middle of the night) standing to alleviate some of the kidney pain. Other than that, I'm happy. I'll be much happier when I get to cuddle this wee babe in my arms. Although by the time he or she makes her grand entrance, she might not be so "wee". One of our midwives thinks this one is going to have a long body with long legs.
And here's one of Andy. I think he feels a little left out with all these pictures of me and my belly. 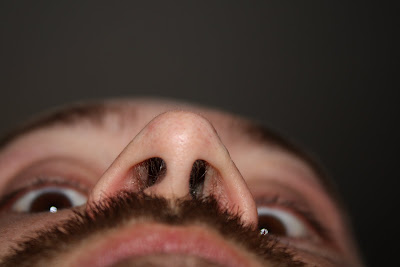 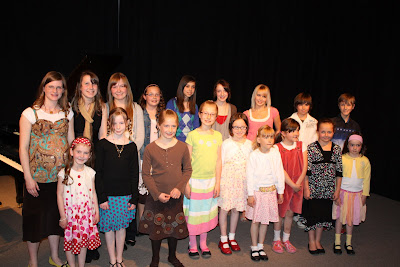 Last week was my last week of teaching for the year. Eight of my piano students performed in the High River Music Festival in addition to our year-end recital on Friday. All my students performed very well and the recital was so enjoyable!

Congratulations to Mandi Hofer, who will receive a Music Festival award at the Adjudicator's Showcase this Wednesday evening! Her performance of Jig, by Violet Archer, was near perfect! Way to go, Mandi!
Posted by kaly No comments: 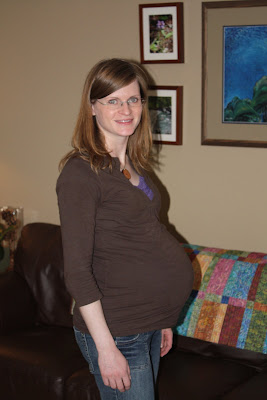 Just when I thought I could get no bigger... my ever-expanding belly surprises us all! 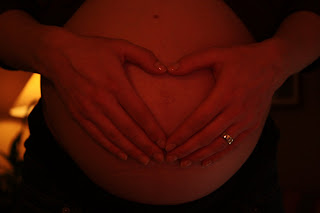 Highlights of this past week (or not so highlights) include: 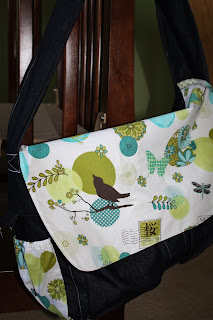 Ode to my Mother. She keeps asking me what I have left to do, and I told her of some sewing projects I wanted to do: hemming the drapes and making the diaper bag. She said it most aptly: "I can do it faster than

you." And true to her word, she spent one day and had it all done! So thanks Mom! Now everyone will want a bag like mine! 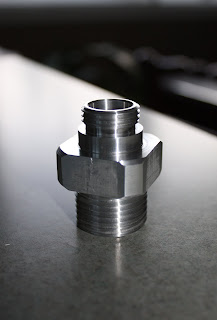 2. Andy is almost finished staining and polyurethaning the dresser for the baby room, yay! And, my talented husband also made an attachment for our kitchen tap that will aid in filling our "birthing pool". Nice work, Andy!

3. This was my last week at Kids Are Special Jr. Kindergarten. Sad, but it had to happen sometime! Unfortunately for me, it happened sooner than later, but more on that next. The kids made a list this week of their guesses as to what sex the baby would be, and what we should name the baby. We had names ranging from "Sweetie" (cute, huh?) to "Tina" to "Princess Annalese". A few of the children thought that their own name was the best, so we got some Calebs and Davons and Connors, etc. I will miss these kids!

4. I had another kidney attack. This time it wasn't a gradual thing - it literally attacked out of nowhere. Stabbing, completely dibilitating kidney pain. Lucky for me it didn't last as long as it did the last time. We (actually, my afore mentioned wonderful Mother) rushed to the hospital and they put me on the monitors to check baby, and in about an hour and a half the pain had subsided considerably. Our midwife suggested we go to Calgary, but when we left High River Hospital, I felt like the pain was going away and we didn't want to spend another night and day waiting around for tests at the Rockyview. So, I stayed home to rest and we went to our pre-scheduled ultrasound on Wednesday morning. Now, there's some prestory to this ultrasound. It wasn't just kidneys that they would be checking. At my last appointment, TWO midwives were stumped by a big lump in my belly that apparently wasn't a discernable baby part. I am also measuring small, so they wanted to check if there was a growth that was taking away from baby. Well, I was very worried. But I know the Lord watches over us and answers prayers (thanks for all your prayers). If there was a lump there, there's not one now! The ultrasound showed baby as happy as a peach. Babe is moving a lot and gets herself into some strange positions, so they think that the way baby is sitting has stretched my uterus into some strange shapes. The spot that was in question turns out to be baby's bum stretching out. Andy was funny, saying that our baby might be born without a bum since everyone's been praying for the lump to go away.
We're so glad that baby is okay. We only have to worry about kidney pain, because they found a small stone in the left kidney, and quite some fluid in the right kidney. It's funny because all this time I've been having a lot of pain in the right one, and the left one never gave me any pain until Monday. So... still a lot of kidney pain, but it's manageable. I've been drinking a tonne of fresh lemon and water and have cut back on many things that may aggravate kidney stones. These things include animal products: meat, milk, dairy, fish, etc. And sugars (which I wasn't having much of in the first place). But now I'm stumped as to what I should eat. Last night I made a really yummy minestrone soup and a roasted red pepper hummus, but I can't just eat beans for the next few weeks! Any suggestions? Please!

5. My good friend Rebecca Smart had her baby 5 weeks early by emergency C-section a week ago Friday. At first things seemed to be going well (at least he was a relatively healthy birth weight of 6.1 lbs), but her baby, Sean, had a few seizures and now has some blood pooled in his brain. After a week in ICU, he seems to be doing better - a few minor seizures, but he is able to breathe on his own and has been able to cut back on some of the tubes and monitors he was hooked up to. They are hoping that if he can feed on his own, the blood will dissapate and he should be able to go home with his parents. The doctors are optimistic, which sounds good. He is in our prayers.

6. This afternoon, Andy and I attended a gorgeous a capella choral concert in High River. My good friend Candia sings in the Spiritus Chamber Choir, who happened to be performing in High River today. What a treat to hear a professional choir like this one! They were BEAUTIFUL!

So, exciting week say the least. I have one more week of teaching piano, with the student recital this Friday, so anytime after that the baby can come! (We hope!) I'm still trying to putz around, doing cleaning and setting up for baby, but in all the essentials we are ready.

Thank you for your thoughts and prayers. It means so much to us at this time!
Posted by kaly 8 comments: