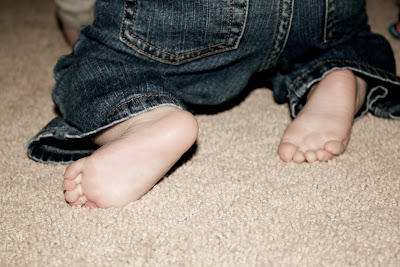 I thought it would never happen. So many months of trying and crying and rocking and ... well, more crying. But he's finally done it, and now he just can't be stopped! I can't believe how fast it happened! Last week, he began taking a few crawling "steps", and by the end of the week, not only was he crawling like a pro, but he was also going from laying to sitting like nothin' and more often these days, we go to get him after a nap (or when he wakes up early in the morning) and he's standing up in his crib, just waiting for us, with a beaming smile and many happy sounds.

It's incredible how much they change in the first year. And from here, there's only more to go! Wait til he starts walking (and he wants to so bad), then I'll be chasing after him even more! So much fun!

I caught this adorable little smile when we went to visit Great-Grandma by sled. He didn't quite know what to make of it all, but by the end, he was making his happy little noises and having a grand ol' time. 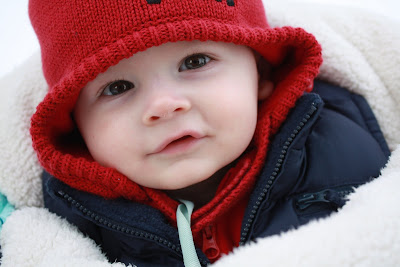